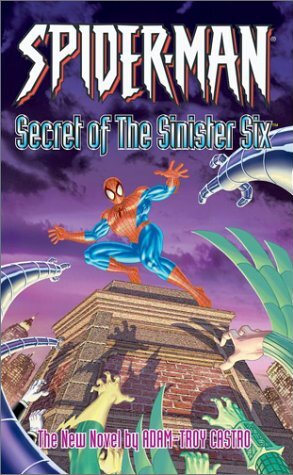 The Sinister Six Trilogy is a series of books written by Adam Troy Castro about Spider-Man facing off against a new Sinister Six, consisting of Doctor Octopus, The Chameleon, The Vulture, Mysterio, and Electro. They are brought together by the Gentleman, a man well over eighty years old who has caused, participated in, and most importantly profited from many of the most heinous criminal acts of the twentieth century. He is a mundane human with no superpowers but enormous wealth, charisma, and criminal skill. He brings with him the new sixth member of the Sinister Six, a Mysterious Waif known as Pity, a mute young woman with power over shadows who fears the Gentleman above all things yet will obey his orders without question; the juxtaposition causes those who see the conflict within her to feel the emotion that is her name.

Through sheer force of personality, the Gentleman brings together the many conflicting tempers, intelligences, and agendas of the Six, bankrolling this latest collaboration with a plan he promises will bring them all wealth beyond their wildest dreams. He plays a dangerous game, a seemingly powerless old man presuming to command some of the most dangerous beings on the planet. Opposing them is Spider-Man, but rather than an obstacle, the Gentleman sees a confrontation with the webslinger as a unique opportunity, as for reasons known only to himself, he has been waiting to exact revenge on Spider-Man for Peter Parker's entire lifetime...