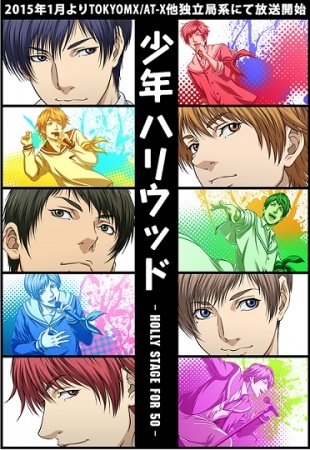 Shounen Hollywood (Usually shortened to just ShoHari/ShoHolly) is Japanese mixed-media franchise created by Ikuyo Hashiguchi. It consists of an idol project, a novel by Hashiguchi that was published by Shogakukan in 2012, and a two season anime television series by ZEXCS that aired between July 5, 2014 and mid 2015. Funimation has licensed the series for streaming and home video release in North America, while Crunchyroll simulcast the series for territories outside of North America since July 5, 2014.

that they'd be willing to do a third season of the anime, HOLLY STAGE FOR 52. Another crowdfunding effort went up in mid-2019 for audio adaptations of 51 and said possible third season, with the whole project retitled Shounen Hollywood 2020; this project also saw to a successful funding campaign. 51 is now a seven-track audio book, and the original prose recollected as a limited edition bonus for purchasing all tracks.