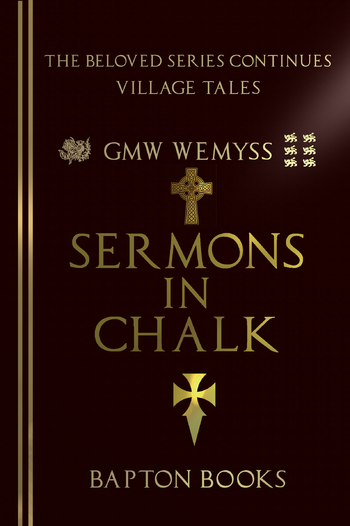 British novel published in 2018 by GMW Wemyss: the fifth in the Village Tales series, following on from 2016's Ye Little Hills Like Lambs, in lieu of the much-delayed (Ordinary Time), now due in 2019.

This slim volume collects the sermons and homilies of the series’ C of E clergy for the Woolfonts and Downlands parishes, some of them from past books and some as yet unpublished and yet to come, both for Occasional Services (christenings, solemnizations of matrimony, and burials of the dead) and for many of the feasts and fasts of the Church Kalendar. It includes the saintly Canon Paddick’s famous “Northern Soul” sermon (on Ruth) and “An Army With Banners” sermon (defending the Church of England); the professorial Fr Gascelyn Levett on S John the Evangelist at the Latin Gate; young Fr Campion on S Aldhelm as an “ecclesiastical Ken Dodd;” and Fr Bohun on the military virtues of discipline, training, and sacrifice.

It is prefaced with introductory remarks by the author as In-Universe parish historian (in which the Real Life delay in publishing Ordinary Time is explained); the Duchess; the Duke, who in quoting “Willie the Shake”: “tongues in trees, books in the running brooks, / Sermons in stones, and good in every thing”: observes that the local geology is chalk, thereby carving out (sorry) the Title Drop; the Bishop, being conscientiously broad-minded; the subtly reluctant Archdeacon; and the gleefully approving Rural Dean.

The character sheet for the series, clergy included, is here.

The tropes common to the series are being listed on that page. Additionally, Sermons In Chalk provides especially notable or specific examples of:

open/close all folders
Tropes A through Z