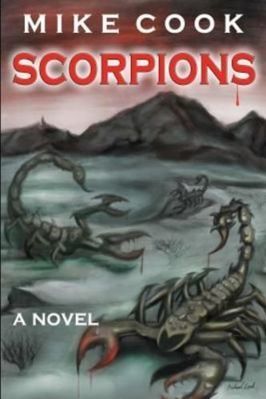 Scorpions: A Novel is a 2016 horror novel written and self-published via CreateSpace by Mike Cook (who also did the cover artwork as "Michael Cook"). Jonathan Landers lives in Laughlin, Nevada. Jonathan only cares about two things, "jamming with his high school friends in a death metal band" (a direct quote) and joyriding on his ATV. After crashing and wandering alone in the desert, he barely manages to make it back to civilization before an earthquake hits. Later, he and his friends find the remains of some kind of animal killed by huge, vicious predators. It seems that quake has unleashed a horde of Scary Scorpions from under the ground, and now the killer arachnids are threatening the "annual biker fest." The boys have to struggle to stop the event before the scorpions crash it, but the money-hungry Mayor Clancy might take some convincing.
Advertisement: