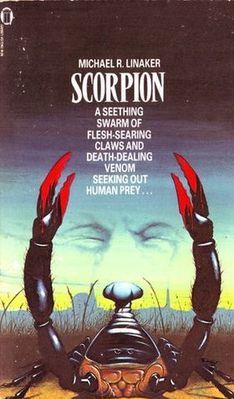 Scorpion is a 1980 horror novel written by Michael R. Linaker. The Long Point Nuclear Plant in Kent has raised hackles among the locals, and Christine "Chris" Lane often leads anti-nuclear protests outside the plant, despite security chief Vic Condon planting agitators in their midst in an effort to discredit them and give him an excuse to send his security Mooks out to knock some heads together.

But soon the people of Kent are experiencing a rash of mysterious illnesses. People are being stung and becoming very sick. Chris' friend Les Mason is among them, and his arm has become grotesquely swollen and black from where he was stung. At the hospital, local physician Dr. Renshaw is baffled and has to call in poison specialist Allan Brady from the hospital's Tropical Disease Research Unit. Allan discovers that the venom afflicting poor Les is more powerful than anything he's ever seen! Poor Les dies in horrible agony in short order.

It soon becomes obvious that Kent is under siege by a plague of deadly scorpions which threaten the entire population...

Scorpion was followed by a formulaic sequel, Scorpion: Second Generation, whose only real difference is that this time the scorpions are giant.