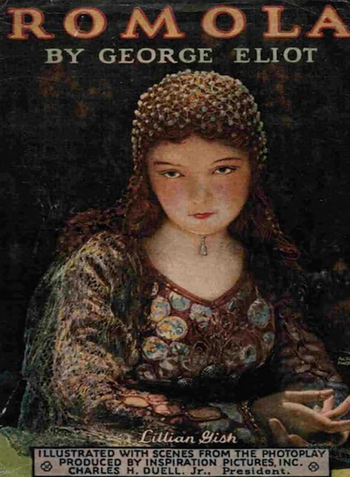 Romola (1862-1863) was George Eliot's only attempt to write a full-blown historical novel in the style of Sir Walter Scott. It explores late 15th-century Florentine religion and politics through the eyes of the beautiful, highly educated Romola and Tito, her witty, cultured and entirely amoral husband. As the story unfolds, Romola becomes disenchanted with her husband, enchanted by the fiery reforming Dominican Savonarola, and then disenchanted once again. Given the sheer amount of research involved, some of it done on the spot, Eliot found Romola extremely difficult to write; famously, she said afterward that "I began it a young woman,—I finished it an old woman."
Advertisement:

The novel was well received in the Victorian period, but is now one of Eliot's less-read novels. It was last adapted for film in 1925.