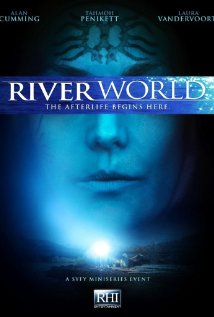 Riverworld is a novel series by Philip José Farmer detailing the adventures of humanity in a world reshaped into one long river-valley. All humans that have ever been born are mysteriously restored to life with a body in its prime, and left to live in this world. There are no ores to make tools more advanced than Paleolithic, so humans are incapable of getting to the other side of the mountains that block the sides of the river. Humans that are killed awaken the next day somewhere else on the river. The novels are told from the perspective of different characters; the first is centered around Sir Richard Francis Burton and the second on Samuel Langhorn Clemens.

There was also a short novella, included in a short story collection, with cowboy movie star Tom Mix as the protagonist:

These were followed by a pair of anthologies, featuring short stories by Farmer and a variety of other authors.

There was also a GURPS setting adapting the novels (copies of it were given to the writers of the anthology stories as references), a video game and two adaptations on Syfy. Aside from the basic concepts, neither had much to do with the original.

The Sci Fi Channel (later Syfy) made two pilots for a possible television series — one in 2003, the other in 2010.