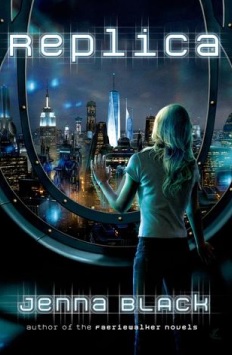 In the future, the United States of America has been dissolved. Now, the country, renamed The Corporate States, is run by powerful corporations and is split up into an extremely divided class system. Paxco provides almost all of the jobs and livelihood for the people of the former state of New York due to the invention of Replicas. Replica technology allows for people who have died to be brought back to life with their memory data downloaded into the new body.
Advertisement:

Nadia Lake is a sixteen year old who comes from a high ranking Executive family. She is engaged to Nathan "Nate" Hayes, the heir to the Paxco corporation in order to help raise the status of her family. Though they both come from the highest, most privileged class, they must deal with the harsh scrutiny of the press and strict expectation of personal behavior.

During the reception of a wedding, Nate is murdered. A day later, he is resurrected using the Replica technology. Having lost a week's worth of memory, he has no idea what happened that night. Nadia is taken in for questioning; despite not knowing who killed Nate or why, she is forced to spy on Nate to help lead them to Kurt Bishop, the main suspect (and Nate's secret boyfriend). Together, Nate and Nadia must attempt to unravel who killed the original Nathan Hayes while inadvertently discovering some sinister state Secrets.

Replica is a 2013 YA science fiction novel by Jenna Black. It is the first book in a trilogy and was followed by Resistance and Revolution.