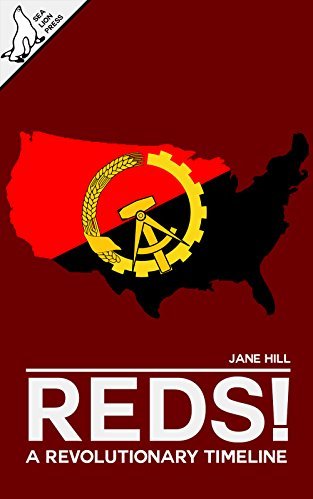 Reds! is an AlternateHistory.com series started by Aelita featuring a Communist America. The series is divided into multiple timeline arcs. The first, from which the series name is derived, is titled Reds! A Revolutionary Timeline, and focuses on the events leading up to a socialist revolution in the United States during The Great Depression. The second, A Red Dawn, chronicles the early development of the new Union of American Socialist Republics (henceforth referred as United Republics), and the alternate World War II.

The first depicts an alternate history in which President William McKinley was not assassinated, and in the resulting political climate (which marginalized Progressive reformers due to Theodore Roosevelt never becoming president), socialism becomes much more popular in the United States (additionally, several important schisms that occurred in the American socialist movement in our timeline did not occur in this one). After a much more brutal World War One (made more brutal, ironically, by the well-meaning attempts of internationalists like William Howard Taft to build stable international alliances), the American populace is radicalized and heavily divided, a powder keg ready to explode, until the Great Depression sparks a revolution in the United States.

While originally a solo project by Aelita, the story has expanded in scope to include two additional collaborating authors, and a large team of several other minor contributors. As a result, the story has underwent various rewrites throughout its publishing history, along with Retcons and Adaptational Expansions to fill in gaps in the lore.

The timeline was published by the Sea Lion Press

The timeline's discord can be found here

There is a Hearts of Iron 4 Mod adaptation being reproduced. Its discord can be found here

Not to be confused with Reds, a movie by Warren Beatty about Red October (although the historical figure John "Jack" Reed plays a big role in both stories).