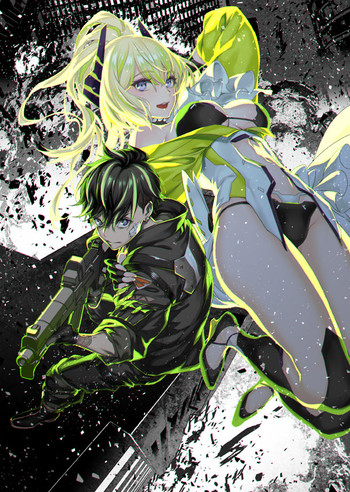 Will you grant her permission?
Advertisement:

There once was a civilization now known as the "Old World". It was filled with miraculous technology capable of accomplishing seemingly anything. But something caused that society to collapse, reducing much of the world to a wasteland and leaving the surviving members of humanity to pick up the pieces. In the present time, people scavenge the ruins of that society for "relics" of the past. These people are known as "hunters", braving countless dangers in search of fame, glory, and wealth.

Enter Akira, a novice hunter who dreams of earning the money he needs to escape the slums beneath the shining walls of Kugamayama City. Armed with nothing but a handgun he pilfered from a corpse, he enters the perilous ruins of the Old World metropolis of Kuzusuhara City in hopes of finding a relic that will make him rich. His life is forever changed when he instead meets a mysterious invisible woman named Alpha that only he can see. An Artificial Intelligence from the Old World, Alpha offers him a contract: Retrieve a certain relic from a certain ruin for her in exchange for riches beyond his wildest dreams. As a form of advance payment, she'll support him in all his endeavors until he's strong enough to live up to his end of the bargain.

Left with no alternatives to even survive the ruins, Akira accepts her aid. All the while, the Tempting Specter smiles as she prepares the boy to fulfill her desires.

) written by Nafuse, with its Light Novel version recieving art drawn by Gin, and a Manga adaptation by Kirihito Ayamura.