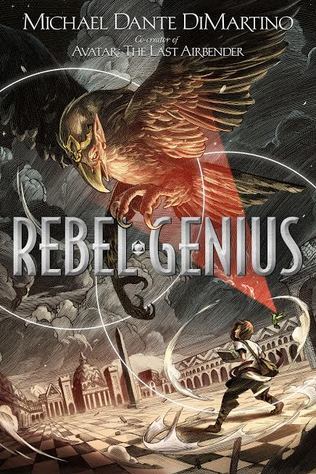 Rebel Genius is the debut novel of Michael Dante DiMartino, co-creator of Avatar: The Last Airbender. Set in a Constructed World inspired by Renaissance Italy where artists use the power of Sacred Geometry to shape the world around them with the aid of bird-like familiars called Geniuses, the story follows Giacomo, a 12-year old aspiring artist living on the streets of Virenzia, capital of the Zizzolan Empire. Because owning a Genius is punishable by death, Giacomo is understandably terrified when he finds himself with a Genius of his own one day completely out of nowhere. But before he can be captured, he's found by a group of other young artists like himself, who take him to a hidden art studio where a once renowned artist lives in hiding, teaching the next generation of artists in secret and preparing for the day when they can overthrow Zizzola's tyrannical ruler and bring about an artistic Renaissance.

In the first book, Giacomo's training is cut short when his teacher's former student Ugalino emerges from hiding on a quest to take control three magical art tools believed to have been used by the creator of their world to bring the universe into shape. With the threat posed by Ugalino's ambition and his ruthless Tulpa enforcer, Giacomo and his new friends must set off on a quest to find the Creator's Compass before Ugalino can use it to destroy Zizzola, and the rest of them along with it.