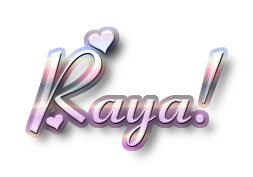 Raya! is a web-novel written by Fourteenwings, it follows the lives of three teenagers living in Autumn Plains, Lauren Matthews, Brianna Winters and Micheal Peterson after they discover that Micheal's little brother, Joey, is missing. They soon find out that something big is going on in their seemingly average city...

Can be found on fourteenwings livejournal