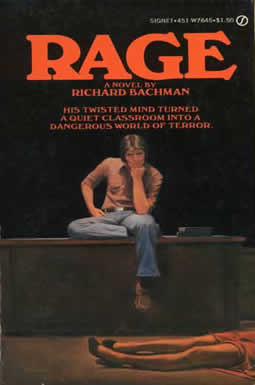 Rage is a novel written by Stephen King, and his first release under the pseudonym Richard Bachman.
Advertisement:

A disturbed high schooler, after being expelled, shoots his teacher and takes the rest of his class hostage. A show-and-tell session with an unexpected flavor of The Breakfast Club ensues.

Stephen King requested the novel to be pulled out of circulation after its connection to several similar school shooting incidents possibly inspired by it.