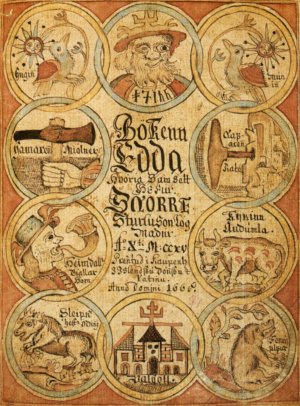 One of the two books referred to as Eddas, the Prose Edda is a poetic manual composed by Snorri Sturluson in c. 1220 CE in Iceland. The book was first known as Edda, then as Snorra Edda (Snorri's Edda), and finally as Prose Edda to distinguish it from the Poetic Edda. The name Edda has often been taken to mean "great-grandmother", but this interpretation is considered outdated; state of the art is that it derives from the Latin "edo", "I compose poetry".

The book has also been referred to as Younger Edda, though this name is considered outdated, as it is not categorically younger than the Poetic Edda.

As mentioned, the book is primarily a textbook for aspiring poets. It consists of four parts:

An online translation can be found on Wikisource