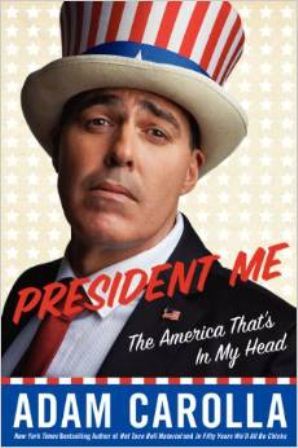 Your next President, ladies and gents. Mahalo.

President Me: The America That's In My Head is the third full-length book (fifth overall) by Adam Carolla. Like his previous books, it is a collection of essays, rants and comedic observation, this time focusing on the changes to the country he would make if elected president.

Adam goes through all the different departments of government, citing what they are doing wrong, and suggesting what he would do to make it right. Many of these are comical and silly, while others, while maintaining humor, are actually fairly good ideas, if often impractical. He also gives a few faux speeches he would make to the U.N. and to Congress (State of the Union). Additionally, he names a new head of each govt. department, mostly his celebrity friends.

President Me presents the following tropes: