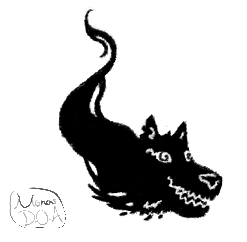 The full story, sans the Epilogue, can be read here.

"It's an interesting time we live in. We have technology that allows us to communicate with anyone, either half-way around the world or right beside us. We have the means to even travel anywhere on the planet, and with our incredible adaptability, humans can not only survive, but thrive. We can make food from almost nothing, and medicine from the limitless chemicals being discovered daily. With the right amount of money, that is.
Advertisement:
Surely, if something were to change, if an apocalypse - of any sort - were to happen, humans would see it coming and even prevent it.
Right?"
— Official description of the Pharmakembru series from the Facebook page.

Pharmakembru is a Medical Horror series written by Monos D.O.A.

The first book, Pharmakembru: The Face focuses on a kid named Alex, who finds strange wrinkles on their stomach during their 10th birthday. At first, they try putting lotion on, but it doesn't work. Almost a year later, the wrinkles morph into a face. Alex spends the rest of the book hiding the face (dubbed 'Sister') from everyone else while trying to maintain their sanity.

Now with a work-in-progress character page!

Considering that genres attached, there will be events included that some may find creepy or disturbing.

Viewer discretion is advised, though not recommended.