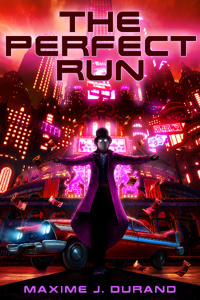 Ryan "Quicksave" Romano is an eccentric adventurer with a strange power: he can create a save-point in time and redo his life whenever he dies. Arriving in New Rome, the glitzy capital of sin of a rebuilding Europe, he finds the city torn between mega-corporations, sponsored heroes, superpowered criminals, and true monsters. It's a time of chaos, where potions can grant the power to rule the world and dangers lurk everywhere.

Ryan only sees different routes; and from Hero to Villain, he has to try them all. Only then will he achieve his perfect ending... no matter how many loops it takes.

A Super Hero story authored by Void Herald. It can be found here

on the Royal Road.