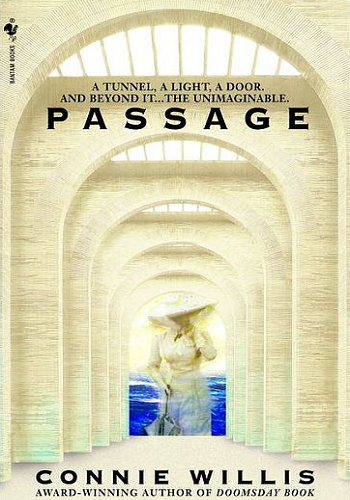 Passage is a 2002 novel by Connie Willis.
Advertisement:

Joanna Lander is a psychologist studying what people experience when they have near death experiences and becomes frustrated when many show signs of giving inaccurate information (especially after having talked to Dr. Maurice Mandrake, whose methods are less scientific than Joanna's).

Then Dr. Richard Wright contacts her and tells her he has found a drug that can simulate an NDE and invites her to interview the patients after they take the drug. After finding there aren't enough volunteers, however, Joanna decides to give herself the drug...but when she does, she finds the experience much different than she imagines. She finds herself on what seems to be the RMS Titanic.