Literature / Once Upon a Winter's Night 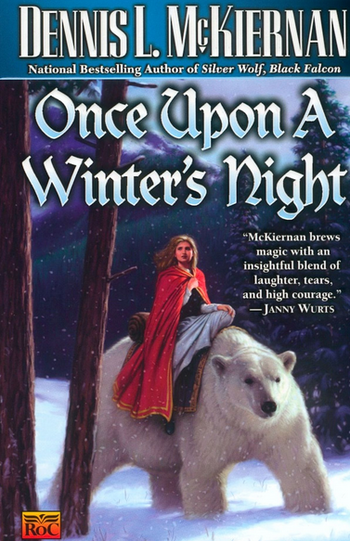 The first book in the Faery Series by Dennis L. McKiernan.
Advertisement:

It is an adaptation of the "East of the Sun and West of the Moon" fairy tale, following it rather closely, but novelized (lengthened) and with some added flavor.

It follows the tale of a young girl named Camille who agrees to marry a prince she's never met in exchange for him providing for her (very large and poor) family. The prince is suffering from an unknown curse, but even so he is chivalric and Camille falls in love with him. But Camille inadvertently triggers the curse, whisking the prince and his entire estate away on a dark wind. With the help of a mysterious oracle, and other friends along the way, Camille seeks to rescue her prince who is somewhere "east of the sun and west of the moon".

Naturally, this book shares many tropes with East of the Sun and West of the Moon.

Has no relation to If on a winter’s night a traveler.

Tropes in Once Upon a Winter's Night: