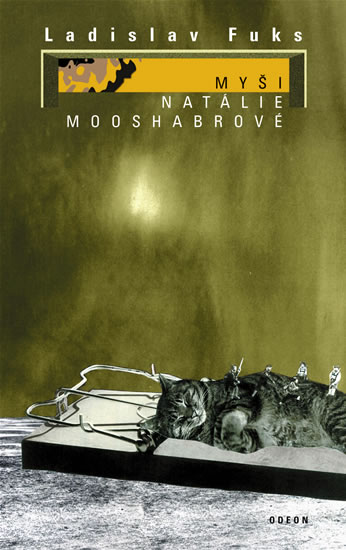 Of Mice and Mooshaber (original Czech title Myši Natálie Moosbrové note  Natalie Mooshabr's Mice ) is a novel by Ladislav Fuks written in 1970. It's an allegory of the evil set in dystopia, mixed with elements of horror and detective/mystery genre, fairy-tale motifs, absurd literature and existential Kafka-esque anxiety. The totalitarianism is mostly implied and very unsettling.

The story is set in a country that is not specified and only vaguely alluded to by names and background events. The state is controlled by a dictator Albin Rappelschlund who governs the country with support from Duchess Augusta. The civilization and technology of the country appear advanced — there is metro, satellite transmission and television broadcasting, and flights to the Moon are common; however, this grotesquely and bizarrely contrasts with things connected to distant past like child labour, horse-drawn wagons, rural-like inns in the capital city or State Office for suppressing and annihilating witchcraft.

The novel describes a life of widowed Mrs Mooshaber who lives in a small flat in half-ruined house where she has to constantly set mouse traps. She works as an activist of the ominous office Care of Child and makes extra money by looking after several graves in the city cemetery. She's frequently disturbed by visits of her her adult son Wezr and daughter Nabule and their fellow Bekenmoscht who steal from her and play cruel tricks on her. Mrs Mooshaber is frequently plagued by the police who constantly interrogate her about her youth which she barely remembers. Mrs Mooshaber's goal in life was to open a kiosk and sell lemonades and cakes. In the course of the novel, she is assigned several mysterious cases of three boys — Faber, Eichenkranz and Linpeck who roam and cause problems to their parents.

People are dissatisfied with Albin Rappelschlund's dictatorship and want to see their rightful ruler, Duchess Augusta. The official propaganda says she still rules together with Rappelschlund but she hasn't been seen in public for decades.

The novel was a first one by Fuks in which he abandoned Jewish themes and Czechoslovakia under Nazis oppression. This novel is lesser known than The Cremator but it is well-respected in literary and academic circles, and it's considered a modern classic of Czech and European literature. Translated into English in 2014.