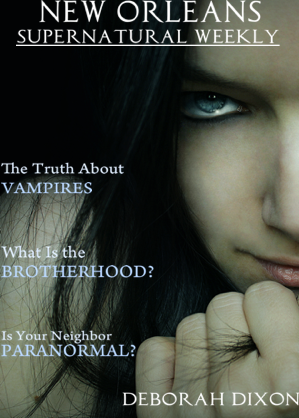 Read all about it....
A fantasy series written for Channillo by Deborah Dixon. The series is updated once every two weeks with a new story. Each story ties into a broader plot arch and begins as a news magazine-style article before switching to a more typical narrative format.

Journalist Sayeva Reardon is pulled into the supernatural underground of her home city after an encounter with vampires causes a disaster. Being no stranger to the supernatural herself, Sayeva decides that the human population needs to be made aware of the unusual threats in their neighborhoods and resolves to create a "weekly" news magazine to expose those dangerous elements. Not everyone appreciates this maneuver.

As with most other Deboracracy works, the series, often shortened to NOSPN, takes place in New Orleans. It also shares characters with other works in that universe, including the Sovereign novels and the ILLUMINATED novellas. The series is ongoing and available on the Channillo website

open/close all folders
General
"Letter From the Editor: In Darkness"
"Siren Song"

This folder contains tropes from the three Halloween 2016 shorts, "Blackout," "The Informant," and "One Thousand."