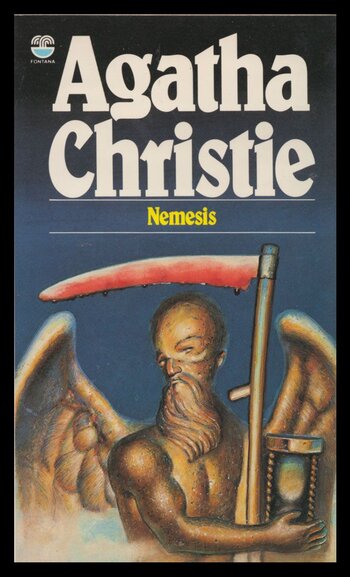 Nemesis is a 1971 novel by Agatha Christie.

Miss Jane Marple receives out of the blue a letter from the estate of millionaire financier Jason Rafiel, a man she knew briefly while on vacation in the island of St Honoré—that being the plot of A Caribbean Mystery. Mr. Rafiel has died, and he has left Miss Marple a bequest of £20,000, but on a strange condition. Mr. Rafiel, who knew Miss Marple for only a short while but saw first-hand her fearlessness, her detective skills, and her dedication to justice, has instructed his lawyers that Miss Marple will receive the money only if she solves a certain crime. The only problem is, the will says absolutely nothing about what that crime is.

Intrigued, Miss Marple accepts the request. No explanatory details are forthcoming, but she does soon get a message that Mr. Rafiel paid for her to join a bus tour of notable English houses and gardens. Assuming that her ticket was purchased for a reason, Miss Marple goes on a tour. Also on the tour is one Elizabeth Temple, a retired school administrator who reveals an important piece of the puzzle. Some years ago one of her students, Verity Hunt, was once engaged to be married to Jason Rafiel's son Michael, but that the marriage did not happen.

The tour stops in a sleepy English village, where Miss Marple gets another surprise. She is approached by a Mrs. Lavinia Glynne, who reveals that Mr. Rafiel, a friend of the family, requested that Mrs. Glynne and her two sisters host Miss Marple during what is reportedly a physically taxing part of the tour that requires a lot of hiking not suitable for an old lady. It is at the home of Mrs. Glynne and her unmarried sisters Clotilde Bradbury-Scott and Anthea Bradbury-Scott that Miss Marple learns the rest of the puzzle. The Hunt-Rafiel marriage didn't happen because Verity Hunt was murdered. Michael Rafiel is now in jail serving a life sentence for that murder. Miss Marple, assuming that this is the mystery she's been hired to solve, sets out to discover who really killed Verity Hunt.

The last Miss Marple novel Christie wrote, although not the last to be published, as Sleeping Murder was published in 1976 (as Christie's last novel ever) after spending some 35 years on the shelf. Not to be confused with the Nemesis Series of superhero novels by April Daniels.