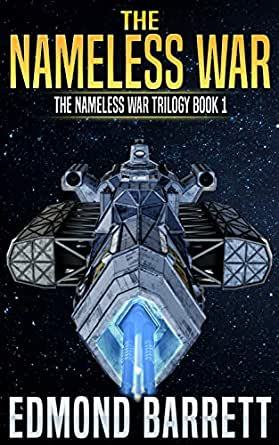 Several decades after First Contact, the technology gained has allowed humanity to expanded beyond Earth's solar system. Those alien races since encountered have been either faced down, defeated or befriended. This is a time of peace and expansion as Earth and her new colony worlds are guarded by the independent military force - Battle Fleet. The first warning that the age of peace is ending comes from the edge of explored space when the aging cruiser, the Mississippi under Captain Ronan Crowe is attacked by an unknown ship. Who this Nameless race are and what they want is unknown, all that is certain is with their long range weaponry and superior scanning technology, they represent a threat far different from any Battle Fleet has either expected or planned for.

The Nameless War is a military science fiction trilogy by Edmond Barrett, the first book of which was published in 2011. The second and third books of the trilogy are respectively The Landfall Campaign (2012) and The Last Charge (2014). The story is told from the points of view of multiple characters, most military but a few civilians. The 'Fog of War' effect with characters making decisions based on information that might be incomplete or out of date is a central theme along with the importance protecting supply lines.

As well as the three books of the trilogy, Edmond Barrett has released (as of 2015) two technical manuals detailing the development and operational histories of cruisers and battleships within the setting.