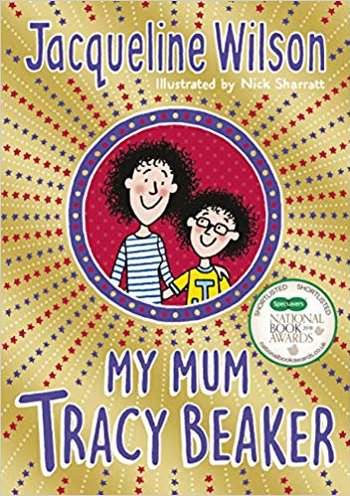 Jessica Bluebell Camilla Beaker is the young daughter of the infamous Tracy Beaker, and while she might look a lot like her mother, she's very different personality wise. Jess is a quiet and thoughtful girl who is often embarrassed by her mother's Anger Issues, but loves her nonetheless. For the longest time it's been just Tracy and Jess, with the former moving from job to job in an attempt to keep a roof over their heads.

But when Tracy starts dating famous footballer and old friend Sean Godfrey, Jess just can't bring herself to be happy about it. Not even when she and her mother get to move into the house of their dreams, not even when they get to drive a beautiful pink Cadillac, not even when Jess gets her very own dog. But Tracy is happy, and for the first time in her life Jess isn't sure what matters more, her own happiness or her mother's.

It was announced in 2020 that CBBC would be adapting this book into a 3-series with Dani Harmer reprising her role as Tracy and Lisa Coleman, Montanna Thompson, and Ruth Gemmell reprising their roles as Cam, Justine, and Carly, respectively. The series was released in February 2021.