Literature / Moribito: Guardian of the Spirit
aka: Seirei No Moribito 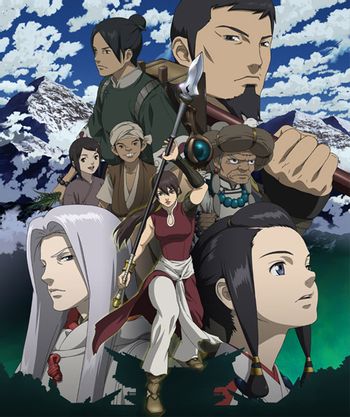 Balsa is a wandering bodyguard, spear-wielder, and martial artist. When Chagum, the second prince of the kingdom of New Yogo, suddenly becomes possessed by what the Star Readers call a 'water demon', the Mikado finds little choice but to have the demon destroyed by killing Chagum. To protect the young prince, the Second Queen secretly hires Balsa to 'kidnap' the prince and thus keep him safe from the reprisals of the court.

With the support of her childhood friend Tanda and crusty shaman Torogai, Balsa must keep the prince safe while living anonymously in New Yogo. Before the winter ends, the characters will have to face several hard truths and decisions as they figure out just what they're supposed to do with the spirit.

The novel has been adapted into:

The anime began airing in North America as part of Cartoon Network's Adult Swim block in August 2008. It was available (with limited commercials) at Crunchyroll

, depending on your preference for subs or dubs. Viz Media acquired the series in 2015 for a DVD and Blu-ray re-release, as well as for airing on Neon Alley.

Moribito: Guardian of the Spirit provides examples of:

open/close all folders
The novel
The anime
The manga
Jin: Guardian of the Spirit Anime Side Story

Alternative Title(s): Seirei No Moribito, Moribito Guardian Of The Spirit