Literature / Mordant's Need
aka: The Mirror Of Her Dreams 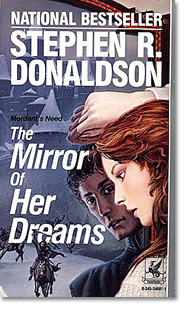 Mirror, Mirror on the wall, who's the ... Wait, who the hell are you?!
Advertisement:

Mordant's Need is a Low Fantasy duology by Stephen R. Donaldson, consisting of The Mirror of her Dreams and A Man Rides Through.

Terisa Morgan is a Shrinking Violet living in a mirror-covered condominium. Obsessed with the idea that she is vanishing and that she exists to no one, she works the toneless days away until the night she meets Geraden. He comes through one of the mirrors in her room and persuades her to accompany him back through the mirror to his world, Mordant.

Once in Mordant, Terisa realizes that she is there for a reason — the mirror-wielding magicians, called Imagers, believe she is The Chosen One to bring peace to Mordant, which is about to be attacked and is slowly deteriorating under the control of a mad king. Terisa thinks they are mistaken, but she cannot go back, especially after one of the most powerful Imagers, Master Eremis, begins to notice her.

Warning: since the series is heavy on secrets, intrigue and Plot Twists, any list of tropes is going to contain heavy spoilers.

Alternative Title(s): The Mirror Of Her Dreams