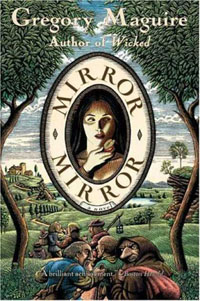 Where Disney, Grimmification and Historical Fiction come together...
I am a girl who did something wrong
I am the other side of the snow
I am a mirror, a mirror am I
Mirror Mirror on the wall
Who is the fairest one of all
— Introduction
Advertisement:

Less-celebrated than Wicked or Confessions of an Ugly Stepsister, Gregory Maguire's Mirror, Mirror is a revisionist take on the tale of Snow White and the Seven Dwarfs (in case the title didn't tip you off).

Set in 16th Century Italy, the story centers around the circumstances surrounding the young Bianca de Nevada and her family's encounter with Lucrezia and Cesare Borgia, two children of the Borgia Pope. Bianca is the only daughter of recently-appointed Don Vincente de Nevada. A widower, Vincente keeps Bianca isolated from the small country town, where she grows up used to being alone. Their quiet life is ruined when the power-hungry Borgia siblings arrive on their doorstep. In exchange for his daughter's safety, Cesare Borgia forces Vincente off on a seemingly-impossible quest to recover a branch which purportedly still carries three of the apples from the Tree of Knowledge. Vincente reluctantly agrees, but quickly becomes the prisoner to the Apple branch's keepers.

Time passes, and with the death of the pope, the Borgia family loses most of its political power. Cesare's military career likewise fails and he himself becomes terminally ill. In a desperate grasp for a political alliance with the de Nevada family, he attempts to rape the eleven-year-old Bianca. Jealous that her brother desired another woman in his last days, Lucrezia arranges for the girl to be covertly murdered. However, the hired killer spares Bianca's life whereupon she falls into the domain of seven mysterious entities with power over earth and stone...

Not to be confused with the 2012 film or the tv series of the same name.