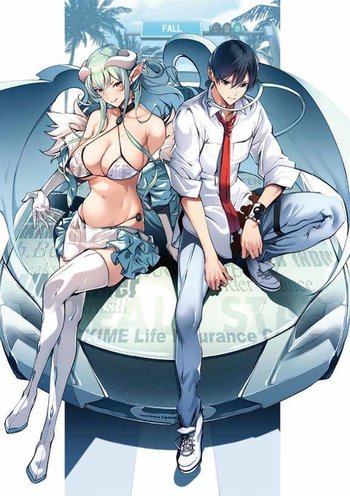 Money (Game) Master is the world's biggest VR online game. It is an open world financial game in which all sorts of illegal actions like violence and theft are allowed in the pursuit of Snow, the game's currency. Due to the game's massive popularity, Snow has significant and growing influence in the real world, thus making the game's conflicts part of the global economy. Players of the game are known as Dealers. Each Dealer is contracted with a Magisterus, an AI-controlled being modelled after a supernatural creature like a demon, which acts as their guide and partner.
Advertisement:

Kaname Suou is one such Dealer, and his Magisterus is a demon named Tselika. Though still a high school student, he's an extremely skilled Dealer, capable of earning 1.7 billion Snow in a single risky transaction. Part of his success comes from his Lion's Nose, a sixth sense that warns him of danger.

Magisterus Bad Trip is a web novel written by Kazuma Kamachi, the author best known for A Certain Magical Index and its related series. It's also adapted into a light novel. The series is complete at three volumes.