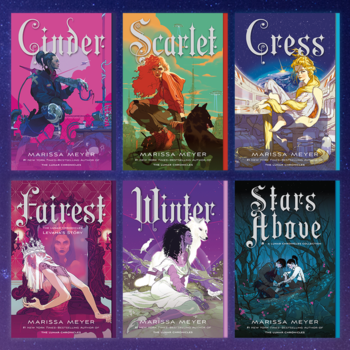 Earth is in turmoil. For over a decade, humanity has been fighting against a deadly plague with no cure in sight. As if that wasn't enough, a war is threatening to break out between Earth and Luna. The current ruler of Luna, Queen Levana, is especially determined to gain control of Earth through whatever means is necessary. And since she has powerful Lunar magic and advanced technology on her side, taking Earth by force is a definite possibility.

There's just one thing that stands in her way: there's a rumor that Princess Selene- her niece and true heir to the throne- still lives. Though she was thought to have died thirteen years ago due to a mysterious fire, evidence has since popped up that she's alive and even on Earth. If true, then Selene could be humanity's ticket to overthrowing the tyrannical Levana and saving humanity from becoming Lunar playthings. Assuming, of course, that Selene would even want to reclaim her birthright at all.

The Lunar Chronicles by Marissa Meyer is a series of YA novels that take classic fairy tales and place them into a sci-fi setting.

Stars Above provides examples of: