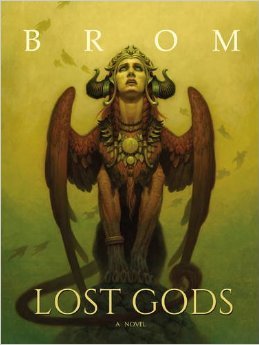 Lost Gods is a dark fantasy novel written and illustrated by Brom.

Fresh out of jail and eager to start a new life, Chet Moran and his pregnant wife, Trish, leave town to begin again. But an ancient evil is looming, and what seems like a safe haven may not be all it appears...

Snared and murdered by a vile, arcane horror, Chet quickly learns that pain and death are not unique to the living. Now the lives and very souls of his wife and unborn child are at stake. To save them, he must journey into the bowels of purgatory in search of a sacred key promised to restore the natural order of life and death. Alone, confused, and damned, Chet steels himself against the unfathomable terrors awaiting him as he descends into death's stygian blackness.

Thrust into a realm of madness and chaos, where ancient gods and demons battle over the dead, and where cabals of souls conspire to overthrow their masters, Chet plays a dangerous game, risking eternal damnation to save his family.