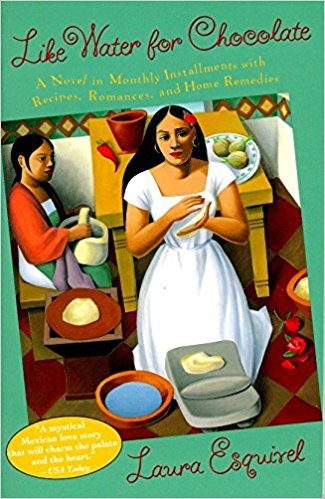 Like Water for Chocolate (Spanish title: Como Agua Para Chocolate) is a 1989 Mexican novel by Laura Esquivel. It chronicles the story of Tita (full name: Josefita De La Garza), a fifteen year-old growing up during The Mexican Revolution with her mother, Mama Elena, her older sisters Gertrudis and Rosaura, the cook Nacha and maid Chencha on a ranch in Piedras Negras, a town near the Mexico – U.S. border. Tita has a love of the kitchen and a deep connection with food, a skill enhanced by the fact that she was practically raised from birth by the cook. Her love for cooking also comes from the fact that she was actually born in the kitchen. Pedro, a ranch hand, and Tita fall in Love at First Sight. He asks Mama Elena for Tita’s hand in marriage, but Mama Elena forbids it, citing the De la Garza family tradition which demands that the youngest daughter (in this case Tita) must remain unmarried and take care of her mother until her mother's death.

Like Water for Chocolate is broken into twelve chapters, monthly installments, each containing a Mexican recipe important to the story at hand. The novel uses Magic Realism to mix the ordinary with the supernatural.

The book was later adapted into a film directed by Alfonso Arau and released in 1992, which became the highest grossing Spanish-language film ever released in the United States at the time.