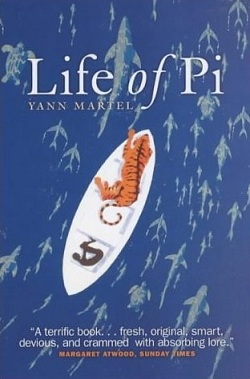 So a boy, a tiger, an orangutan, a hyena, and a zebra all get into a boat...
"The reason death sticks so closely to life isn't biological necessity — it's envy. Life is so beautiful that death has fallen in love with it, a jealous, possessive love that grabs at what it can. But life leaps over oblivion lightly, losing only a thing or two of no importance, and gloom is but the passing shadow of a cloud."
— Piscine Molitor Patel
Advertisement:

The award-winning Life of Pi (2001) by Yann Martel is about the life and times of Piscine Molitor Patel, better known as Pi (pronounced "pi", as in, 3.14). An Indian teenager, Pi becomes philosophical at a very young age, becoming an adherent of no less than three religions (Islam, Christianity and Hinduism). His parents find his interest in religion odd but accept it nonetheless. They run a large zoo in Pondicherry, until circumstance forces them to move to Winnipeg, Canada.

The family sells their animals to a variety of zoos, and gain passage to Canada aboard a cargo ship — the Tsimtsum — that happens to be carrying a number of their own animals. For unknown reasons, the Tsimtsum sinks, leaving Pi bobbing along the Pacific in a lifeboat. Alone.

Well, not quite alone.

Pi shares his lifeboat with an orangutan, a zebra, a rat, various insects, a hyena, and a 450-pound adult Bengal tiger. Eventually, it becomes just him and the tiger.

What follows is an odd and touching story, recounting the trials and tribulations that Pi endures during his 227-day ordeal on the lifeboat.

Was adapted into a 3-D Movie, directed by Ang Lee and starring newcomer Suraj Sharma as Pi, released on November 2012. The film proved a critical and commercial success, winning four Academy Awards, including Best Director (Steven Spielberg, director of Lincoln, was expected to get the prize).

This media provides examples of: