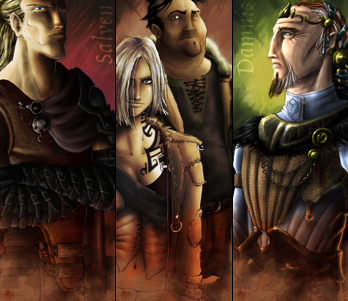 Only a small portion of the Badass Normal main cast.
Advertisement:

(Chimaeras of Mirinar) is a French serial of dark fantasy, deconstructing most of fantasy figures into an action adventure packaged with violent psychology and political reflection.

The story focuses on the vain and parallel evolution of two childhood friends, Elsy the mercenary and Elodianne the magician. These two women have great ambition and divergent philosophies.

The first novel, Teliam Vore, also recalls the recent past of the country, with a mutant epidemic restricted by three brave officers, Orcreste Damnis, Corbes Salven and Teliam Vore. The first became ruler of the country, the second a provincial governor, and the third a crazy guy. The sad destiny of Teliam Vore is primordial to the main plot, as he will come back with inhuman and sinister features and lead a magical terrorist squad against the government. Elsy and her mercenary agency are led to a suicide mission against these renegades.

The second novel, Les reflets du temps (Reflections of time), focus on the mirror-worlds (magical Mind Screw pocket universes) and the distant past and future. Chapters are more independent and there is not recurrent bad guys (or Big Bad) at the time being.