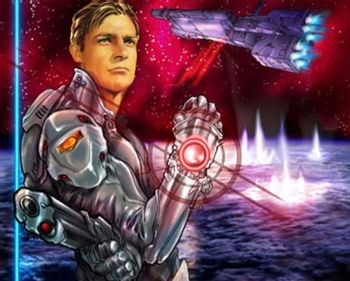 The Lensman series by E. E. "Doc" Smith counts as one the earliest Space Operas, and, therefore, the Trope Maker of many of the conventions used by the genre. This makes the series a must-read for anyone interested in the genesis of Science Fiction.

The series was assembled from Galactic Patrol, a serial published in Astounding Stories magazine from 1937 onwards. (Smith rewrote and expanded Triplanetary, serialized in 1934 in Amazing Stories, to serve as a prequel to the main series.) It describes the epic battle between Good and Evil as personified by Civilization (and their sponsors, Arisia) and Boskone (and their sponsors, Eddore), respectively. Each faction is, in fact, the pawn of a different race of Sufficiently Advanced Aliens who each have a grand plan for the sentient beings of the universe.

The Kinnison bloodline plays an important role for Civilization, since it was carefully bred over millennia by the Arisians to produce a race of super-beings that would ultimately supplant the Arisians themselves.

The title object, the Lens of Civilization, is an Empathic Weapon that initially grants its users Psychic Powers which vary in strength and effectiveness from user to user, as well as providing an identification for Law Enforcement that cannot be forged or duplicated and instantly kills anyone attempting impersonation. For certain, special individuals, the Lens is largely a Magic Feather.

The Lensman series consists of:

The book version converted Triplanetary, an originally unrelated serial, into a prequel by adding new material to the beginning. The original serialized version of Triplanetary, but not the revised version of the novel, has gone into public domain, meaning that a number of e-bookstores have the old version, sometimes for free.

Masters of the Vortex (also known as The Vortex Blaster) appeared as works of short fiction which Smith reconfigured into novel form in 1960. It occurs in the same continuity but here the events of the Boskonian war are peripheral and irrelevant to the plot. Atomic powerplants around the galaxy have for many years been exploding, turning into all-consuming, all-polluting, inexorably-growing fireballs that defy analysis, explanation or control. Neal Cloud, a mathematical prodigy who heads up the scientific efforts to do all three, is inspired to develop a means for their destruction when he loses his family to one and sets out to clear the galaxy of them. Along the way, he has various adventures, foils a criminal mastermind and, with the help of a female cybernetic engineer every bit as brilliant as himself, finds out the stunning truth of exactly what the Vortices are and why.

The Lensman series was adapted into a (unlicensed) Japanese Anime movie (SF New Century Lensman) and series (Lensman: Galactic Patrol) , which took the basic outline and the names of most of the major characters and turned it all into a Star Wars ripoff. Doc Smith's estate attempted to sue the anime's creators over the series but the lawsuit was thrown out on a technicality. (The litigants had waited too long before acting and thus failed to protect their copyright.) The movie and a Compilation Movie of part of the series were dubbed in English by Harmony Gold USA. Later, Streamline Pictures redubbed the movie with the original soundtrack and no cuts for content.

In 1963 the New England Science Fiction Association named their annual SF convention "Boskone" (a play on "Boston Convention") in Smith's honor. The convention newsletter is named "Helmuth", of course.note Helmuth is an intermediate Dragon who always begins his messages to his underlings by saying "Helmuth, speaking for Boskone!" After a group of fans got in trouble with the Boskone organizers, they started up an alternative (and, eventually, larger) convention called "Arisia."

WARNING: Spoilers may be unmarked.

Tropes used in the Lensman series include: