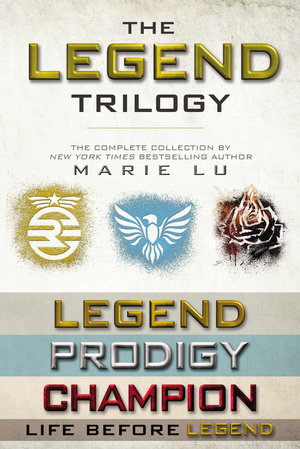 In a dystopian future, the USA is divided into two rival nations: "The Colonies of America" and "The American Republic". Every year, all 10-year-olds of the Republic must go through the "trial". Those who are successful move on to the the best schools and universities, usually followed military and government careers. Less satisfying results lead to a life of poverty, or worse.

The story is told in dual perspective, narrated by the two 15-year-old leads: Day, a boy from the poor, plague-ridden sectors of LA and a wanted criminal turned legend, and June, a prodigy born into one of the Republic's elite families, and the only person in the history of the Republic to receive a perfect score on her trial.

Their paths cross when June's brother, Metias, is killed on a military patrol. The blame falls on Day, and June vows to capture and bring him to justice. She sets out to the poor sectors, disguised as a street rat, in pursuit of Day. Their encounter sets off a chain of events that inevitably changes their lives, and the fate of both nations.

The series was originally envisioned as a trilogy (see the page image). However, Lu ultimately decided to revisit the series and wrote another entry, turning it into a tetralogy consisting of:

There are also three novellas:

Legend's film rights have been sold to CBS Films, with Twilight producers Wyck Godfrey and Marty Bowen set to produce. Jonathan Levine was set to direct the film but eventually departed. The project appears to have slipped into Development Hell.