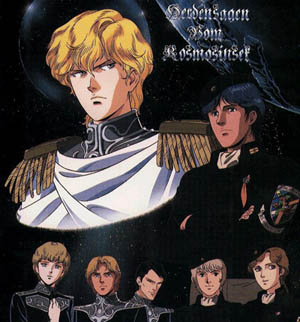 "In every time, in every place, the deeds of men remain the same..."
"There are few wars between good and evil; most are between one good and another good."
— Yang Wen-li
Advertisement:

Legend of the Galactic Heroes is an enormous, sprawling 110-episode (plus side stories) Space Opera originally released on home video. (It is, therefore, the longest-running OVA of all time, although it was later shown on TV.) This is in Japan, of course, as neither the anime, nor the manga, nor the huge series of novels written by Yoshiki Tanaka which spawned the franchise have ever been released in America... until Anime Expo 2015, when Viz Media licensed the novels and Sentai Filmworks licensed the OVA which is now available on Hidive. (A noble yet feeble attempt at licensing a dub version of the anime was made many years earlier, but no one bit, and thus the only way the series was accessible in English until recently was via Fan Sub.)

And yet, said glacial pace gives way to one of the most well-regarded stories in anime history, rich with philosophical debates, tactical planning, a healthy amount of Genius Bonus and enough political intrigue to fill the Bundestag three times over. The series is filled with Character Development, dissertations on themes like authoritarianism versus democracy, and takes inspiration from many real life historical empires to form the basis of its background. Anyone from historians to politicians to engineers will find something to like in this series, and if you don't care about any of that stuff it's also a great character drama as well. Plus, who doesn't love political thrillers set in space?

In 2015 a new manga adaptation of the novels began in Weekly Young Jump, by Ryu Fujisaki of Soul Hunter and Shiki fame.

A new anime adaptation by Production I.G., subtitled Die Neue These, was released in April 2018. It is being billed as a new adaptation of the novels, rather than a remake of the OVA series.

Legend of the Galactic Heroes provides examples of: