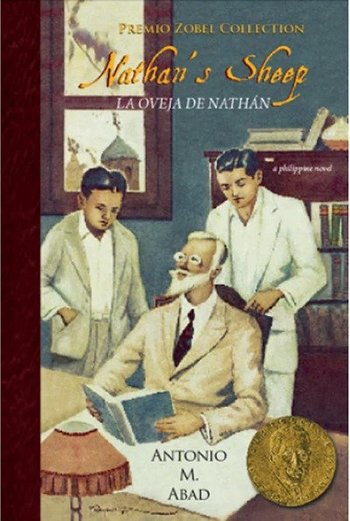 La Oveja de Nathán, in English "Nathan's Sheep", is a Spanish-language Filipino novel by Hispanophone author Antonio M. Abad. Written in The Roaring '20s, when the Philippines had emerged from 300+ years of Spanish colonial rule but was now under U.S. colonial rule, it was written from 1925–26, published in 1928, and won the Premio Zobel, a Philippine-wide competition for Hispanophone literature, in 1929. In 2013, a bilingual Spanish/English edition was released, translated by Lourdes Castrillo Brillantes.

It is epic in length and scope, and centres largely around the life and adventures of young Mariano Bontulan, serving as a typesetter in the Philippine government printing office, under the direction of his elite boss, Don Benito Claudio de Hernán González, who though a principal negotiator with the new American imperialists and cofounder of an early assimilationist political party under the U.S. regime, holds a deep suspicion for the new colonisers, and imparts his thinking to Bontulan over the course of the latter's employment. Meanwhile, Bontulan, hearing of the news of The Great War, decides to sign up for the American side.

It is considered, by the few scholars who have read and studied it to date, to be possibly the greatest work of Filipino Hispanophone fiction, and has been compared to no less than War and Peace (hopefully not just because of its massive length and epic scope).