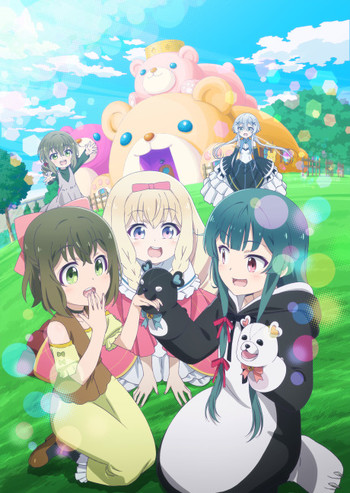 It's a good day to enter another world while in your pajamas.
"This is indeed cheating equipment for me, who is at maximum level...but it's so embarrassing."
— Yuna, when she first sees her future Iconic Outfit, the "Bear Suit"
Advertisement:

Kuma Kuma Kuma Bear is a Japanese Light Novel series written by Kumanano and art drawn by 029. The series was first serialized on October 13, 2014. It was adapted into a 12-Episode Anime by EMT Squared for the Fall 2020 season. A second season has been announced.

Fifteen-year-old Yuna prefers staying inside and alone in her fancy high-rise apartment, obsessively playing her favorite VRMMO, World Fantasy Online, to the detriment of everything else like socializing with others, going to school, and going outside in general. When a strange new update gives her a one-of-a-kind bear outfit that comes with overpowered abilities, Yuna is torn: the outfit is unbearably cute but too embarrassing to wear in-game. But then she suddenly finds herself transported into the world of the game, facing down monsters and magic for real, and the bear suit becomes the best weapon she has!

For character-specific tropes such as appearances, items unique to them, or their abilities, see the Characters page.

As there are multiple iteration of the series: Beware of unmarked spoilers.