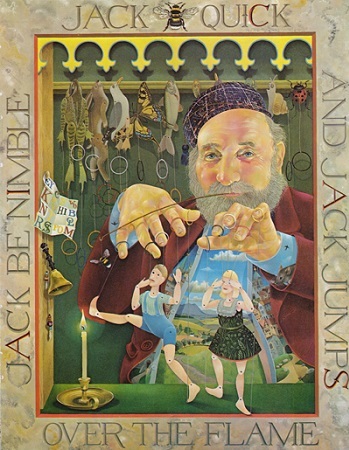 This illustration contains the key to the whole puzzle. Good luck working out how...
If I was to spend two years on the 16 paintings for Masquerade I wanted them to mean something. I recalled how, as a child, I had come across 'treasure hunts' in which the puzzles were not exciting nor the treasure worth finding. So I decided to make a real treasure, of gold, bury it in the ground and paint real puzzles to lead people to it.
—Kit Williams

Masquerade is a children's picture & puzzle book painted by Kit Williams and published in 1979.

The plot is fairly simple: The moon loves the sun, and to show how much she loves him, she gives a token of love to be delivered by the fastest creature around: Jack Hare. The hare then travels quickly through the country, and finally speaks to the sun, but finds that he's been careless and has lost the gift he was supposed to deliver, and the reader is tasked with finding where he dropped it.

When the book was published, an elaborate golden jewel pendant shaped like a hare - designed and crafted by Williams himself - was buried somewhere in Britain, with the promise that the book would act as a guide to help find it. Each of the pictures was surrounded by cryptic text, and had hidden images, odd symbology and weird puzzles in. Lots of puzzle fans scoured through, trying to find the location of the hare, mapping the locations painted, working the implications of symbols, mixing the words into anagrams until they made something like sense, and then finally driving out to the back end of nowhere and digging a hole. And coming home disappointed. Eventually, three years later, the treasure was dug up, and Williams announced the contest closed.

It turns out that the winner (Dugald Thompson) had not cracked the fiendishly complicated clues; he simply knew people close enough that he had a good idea where the treasure was buried, and caught onto two physics teachers, Mike Barker and John Rousseau, who had worked out the secret, but had overlooked the box where they were digging. Williams was naturally crestfallen when he found out that he had been deceived and the real winners had lost out on the prize to a con-man.note  Karma eventually caught up to Thompson and his partners in crime when the software company he started with the hare as collateral went bankrupt, and the liquidators took possession of the hare and sold it at Sotheby's in the late 1980s. Barker and Rousseau didn't even see the hare for themselves until they were invited to a special one-day exhibit of Williams' paintings in 2009 to which the hare's then-current owner had loaned it.

Of course, like any such thing, the revelation that the puzzle was solved didn't convince some more hardcore enthusiasts, who would continue to dig holes in the middle of nowhere for a few more years.