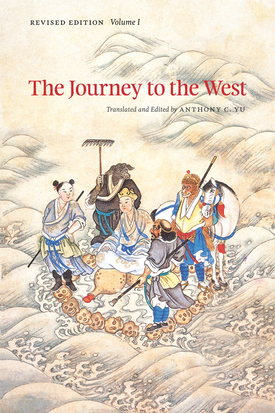 alongside Romance of the Three Kingdoms, Water Margin, and Dream of the Red Chamber, and first published in the 1590s, although it is plainly based on much older folk-legends. It is Inspired by… the pilgrimage undertaken by the Tang dynasty Chinese Buddhist monk Xuanzang, who nearly a thousand years earlier travelled to India to study Buddhism at its source and obtain accurate copies of Buddhist texts (the "Three Baskets Scriptures") known in China only through inaccurate nth-generation copies.

While it is popular in Japan, it's omnipresent in its native China. For example, there was a 1980s Journey to the West TV series in China that was so popular, it's said that to this day there's always at least one television station rerunning it anywhere in the nation (and also in Vietnam, where it's just as famous and widely loved.) The show is amusing even if you don't understand Chinese.

The tetralogy from Shaw Brothers made in the late 60s, The Monkey Goes West, is in particular the first instance of a ground-breaking adaptation of the novel series. Jeff Lau's A Chinese Odyssey films renewed the popularity of the novel for young Hong Kong audiences during the mid-'90s.

You can read the whole story here