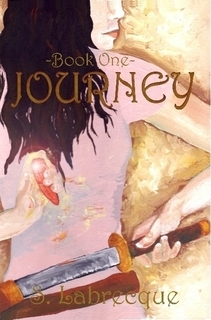 Journey is a Young Adult Fantasy series by S. Labrecque. The series takes place in a country called The Middle Kingdom that has elements of Medieval Europe and Medieval Asia. It focuses around a teenage girl named Joyah Pain who grew up in an isolated village with little knowledge of the outside world. This all changes when Joyah finds a magic jewel that sends her on her Journey, a coming of age quest that each child in her family has to go through. She discovers the jewel is part of a larger MacGuffin, the Connarist necklace, that is wanted by powerful Guilds such as the Assassins. Joyah and her new companions, Jeffrey Raymond, Gilla Fletcher, Mallew Archibald, and Orwen must take the jewel to a Sanctuary so it won't fall into the wrong hands. Along the way, they meet an assortment of characters including Addri Mogami, Jen Enya, Henna Lyre of the Guild of Angels, and the PowerTrio Hasin Starling, Ala, and Ruen.
Advertisement:

While book one mostly stays in the northern Gorem Region where Joyah and her friends were born, book two involves them leaving their home Region and traveling south down the coast in search of new clues. It includes new characters—both allies and enemies—and new challenges and experiences for our heroes.

The current books include:

Warning: Unmarked Spoilers for book one.