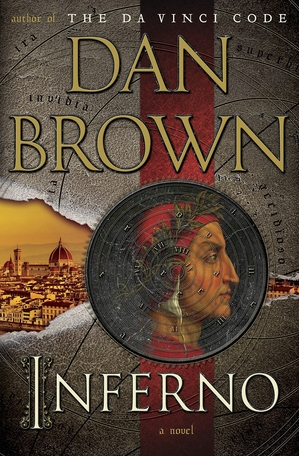 "There's a switch. If you throw it, half the people on Earth will die. But if you don't, in a hundred years, the human race will be extinct. I gave you a path. The hardest one yet. Only you can finish it. You are humanity's final hope."
— Bertrand Zobrist
Advertisement:

Inferno (2013) is Dan Brown's sixth published novel and the fourth to star Robert Langdon, the protagonist of Angels & Demons, The Da Vinci Code, and The Lost Symbol. As the title suggests, the plot is very heavy on references to Dante Alighieri's The Divine Comedy.

Langdon wakes up in a Florentine hospital with a gunshot wound in the back of his head and a complete blackout about the last couple of days, including such important details as who shot him and how he ended up in Italy without any documents in the first place. Before long, the sinister Consortium's hitwoman catches up with the wounded professor, who barely escapes with some help from Sienna Brooks, a visiting ER doctor from Britain. Together, they have to uncover the truth about why Langdon is being hunted and what the whole thing has to do with Dante Alighieri and a prominent biologist who committed suicide a few days earlier in Florence.

Then, in the course of the novel, the entire premise gets turned on its head.

A film of the book, directed by Ron Howard and with Tom Hanks reprising his role as Robert Langdon, was released on October 28, 2016. The cast includes Felicity Jones as Sienna Brooks, Irrfan Khan as Harry "The Provost" Sims, Sidse Babett Knudsen as Dr. Elizabeth Sinskey, Omar Sy as Christophe Bouchard and Ben Foster as Bertrand Zobrist.