Literature / In Between The Stars 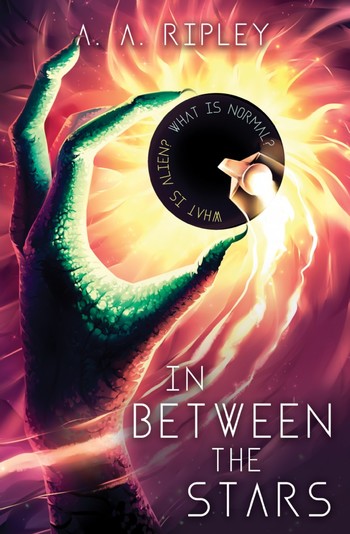 In Between the Stars is the debut novel of A. A. Ripley. It is an adventurous Space Opera, written from the point of view of a nonhuman character.

What is alien and what is normal? To Inan, she’s just a girl on her homeworld, yet she dreams of travelling to the stars and experiencing all the adventures they promise. Dream is all she can do, as her people’s customs forbid girls to face dangers - especially amongst the stars. Instead of adventures, they are expected to serve their families as leaders and never take personal risks. But that is about to change as Inan’s life takes a sudden turn.

A series of events lead to her being lost in space, shipwrecked and kidnapped by soldiers-turned-pirates, a remnant from the war fought many, many years ago. With only an alien being to keep her company, she is forced to use her wits to stay alive. As she struggles, she befriends Alan, a human boy who is little more than a captive himself. Yet things go from bad to worse after a failed escape attempt when Inan comes into contact with an unknown ancient artefact which ultimately will decide the fate of the whole galaxy.