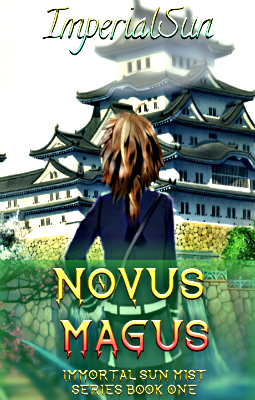 Entries in the series include:Novus Magus

and the currently ongoing Blade of Ruin

Also has a prequel anthology, called Lost to the Ages- [1]

and a spin-off series consisting of Heart of Magic

which takes place in a different planet within the same universe.

The main series covers the story of Lei Lan, a boy who seeks to become the strongest magician in the universe. However, he first must deal with his 'crimpling disease' as well as the trauma that bullying revolving around that disease caused in him.To become the strongest mage, he sets off to Nine Petal Academy, one of the top magic school on the continent of Tozan Hoshi. Only issue is that the school isn't even in his home country of Wahkan but in the Empire of Kyuu Seishin on the mainland.

Despite knowing this, Lei dedicates himself to passing the exam and hopes to win the 'First Year Exchange Student Tournament' that the newly admitted foreigner students are required to participate in following the exam.

While taking the test, he meets several different people, such as the stern Nyima and the wannabe ladies-man Iah, among others. In addition he reunites with an old friend from his childhood whom he once swore to protect for reasons known only to him and that girl.

What he and the others don't anticipate, is the resistance to their presence in Nine Petal Academy. Lei and his friends must figure out a way around that resistance or have their dreams come crashing down on them.

The prequel meanwhile is a compilation of tales that tell the events of the world of Xeleria, thousands of years prior to the birth of Lei.

The second book, Descent of Darkness, as well as the prequel are currently posting.