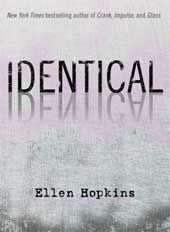 Ellen Hopkins's Identical is a verse novel which tells the stories of identical twins Kaeleigh and Raeanne Gardella, the 16-year-old daughters of a district court judge, and a candidate for the United States' House of Representatives. While their mother campaigns for the House position, Kaeleigh and Raeanne are left in the care of their alcoholic father and have to deal with maintaining the family's "perfect" appearance while struggling with the secrets that tore them apart.