Literature / How I Paid for College 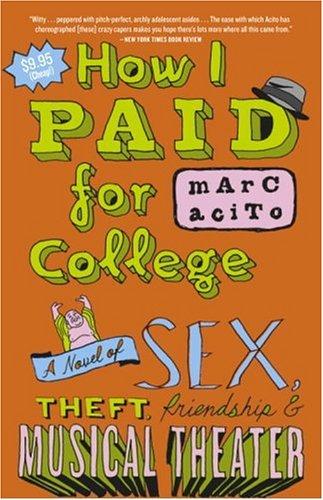 The title's pretty much Exactly What It Says on the Tin
"The story of how I paid for college begins like life itself — in a pool of water. Not in the primordial ooze from which prehistoric fish first developed arms and crawled into the shore but in a heavily chlorinated pool of water in the backyard of Gloria D'Angelo's split-level ranch in Campton, New Jersey."
—Edward Zanni, our narrator, first page
Advertisement:

It's 1983, Wallingford, New Jersey, a sleep bedroom community. Edward Zanni, an seventeen year old aspiring actor, is ready to go to the school of his dreams, Juilliard, after a summer of mischief and creative vandalism. However, after his father, Al, remarries and refuses to pay for his tuition, Edward turns to his lovable group of misfit musical theater friends as they engage in blackmail, forgery, embezzlement and various illegal tactics to raise money for him to pay for college.

Ladies and gentlemen, this is How I Paid For College: A Novel of Sex, Theft, Friendship and Musical Theater by Marc Acito. There is also a sequel, Attack of the Theater People.