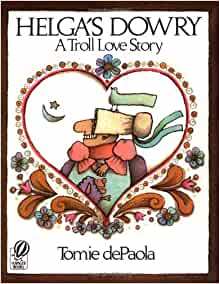 Helga's Dowry is a picture book by Tomie dePaola.
Advertisement:

Pretty but poor troll maiden Helga has a problem: she has no dowry, and without it, she cannot compete against Inge, who is trying to steal her boyfriend Lars. So Helga sets out to earn her own dowry — but will it be worth it?