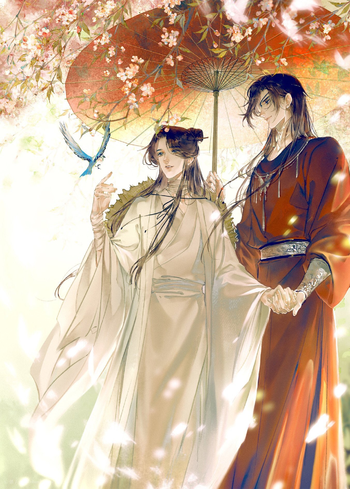 That infamous weirdo, the laughingstock of the three realms, the legendary Royal Highness the Crown Prince, he...he...he... he fucking ascended again!
— Prologue
Advertisement:

Born the crown prince of a prosperous kingdom, Xie Lian was renowned for his beauty, strength, and purity. His years of dedicated study and noble deeds allowed him to ascend to godhood. But those who rise may also fall, and fall he does — cast from the heavens and banished to the world below.

Eight hundred years after his mortal life, Xie Lian has ascended to godhood for the third time, angering most of the gods in the process. To repay his debts, he is sent to the Mortal Realm to hunt down violent ghosts and troublemaking spirits who prey on the living. Along his travels, he meets the fascinating and brilliant San Lang, a young man with whom he feels an instant connection. Yet San Lang is clearly more than he appears... What mysteries lie behind that carefree smile?

The webnovel is split into five books, with a total of 252 chapters (244 main chapters and three extras) and was officially completed in 2018. It's been translated in various languages, with an English translation by Seven Seas Entertainment that began in December 2021 and runs over eight volumes.

Note: Names, terminology and quotes are based on the official English novel translation by Seven Seas Entertainment whenever possible.

With the heaven official's blessing, no paths are bound.