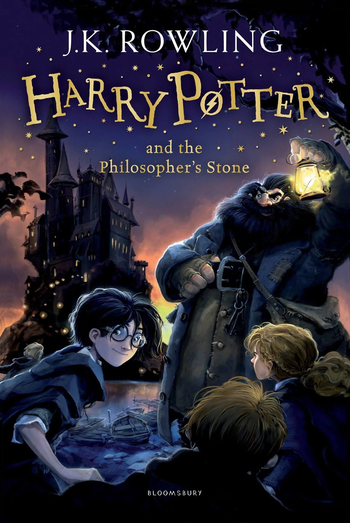 "Harry—yer a wizard."
"To the well-organised mind, death is but the next great adventure."
— Albus Dumbledore
Advertisement:

Harry Potter and the Philosopher's Stone is the first book in the Harry Potter series, published in Britain on 26 June 1997. The first print run was only 500 copies — 300 of which were distributed to libraries. It was a humble, quiet beginning to what would become one of the top-selling book series (and one of the largest entertainment franchises) of all time.

Harry thinks he's a normal kid, living a sucky life with the Dursleys, his social-climbing Muggle Foster Parents who hate him and all that he represents. Much to his surprise, however, on his eleventh birthday, Gentle Giant Hagrid shows up and tells Harry that he's not only a wizard, but a wizarding celebrity due to having survived an attack by Lord Voldemort ten years ago, somehow rendering the evil wizard MIA. It's then off to Hogwarts, where Harry befriends Ron Weasley and Hermione Granger, forming the iconic Power Trio. The three begin to suspect that someone is planning to steal the mystical stone of the title, which could be used to restore Voldemort to full power.

Retitled Harry Potter and the Sorcerer's Stone in the United States because the American publisher worried that kids would think a book with "philosopher" in the title would be boring. Of course, this was before Harry Potter was the reliable franchise it became.

In 2001, the film adaptation was released. Like its source material, the movie earned strong critical reception; it also ended up as the highest-grossing motion picture in the world released that year, and started a series of films based on the books. Since First Instalment Wins, the plot of this book will be much more familiar to non-fans than any of the others.