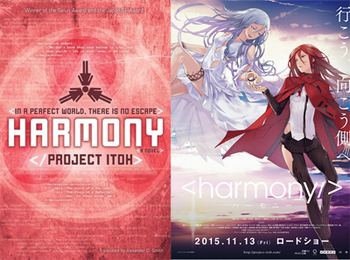 English version's cover (left) and the poster of the movie (right).

"My body is my own. I want to live my own life. Not sitting around waiting to be strangled by some stranger's kindness."

Harmony is a dark sci-fi novel written by the late Project ITOH (Real name Satoshi Itō) while he was suffering from final stage of cancer, and published in 2008 (before translated into English in 2010, published by Haika Soru as a book and through Amazon e-book). It won the Nihon SF Taisho and the Seiun Award in 2009, got a special citation in 2010 Philip K. Dick Award, and was adapted into an animated movie directed by Michael Arias and Takashi Nakamura, animated by Studio 4°C. The movie, released in 2015, is part of a series of films based on the last novels written by Project Itoh, alongside The Empire of Corpses and Genocidal Organ. A Manga adaption of the movie is also available, illustrated by Minato Fumi.

The story is set in the future after the Maelstorm, an era where diseases and nuclear war once engulfed the Earth, leaving the global populace reeling. To prevent new horrors, the countries were divided into even smaller states, with a deeper ethic and a more solitary society through social pressure. Health is controlled by "admedicstration", facilities where nanotechnology is used for medical purposes, to allow for better living. In such a utopia dominated by the belief of Lifeism, Tuan Kirie, a Helix Inspector working for the World Health Organization, was re-assigned to Japan for her misbehavior just in time to see the its peaceful citizen begin committing suicide en-masses, something not entirely unfamiliar to Tuan's shared childhood with her friends...

Not related to 2010 Korean film, a video game, a web comic or another sci-fi novel of the same name by Keith Brooke.